Zombie Subcontractors: How to Identify & Avoid Them 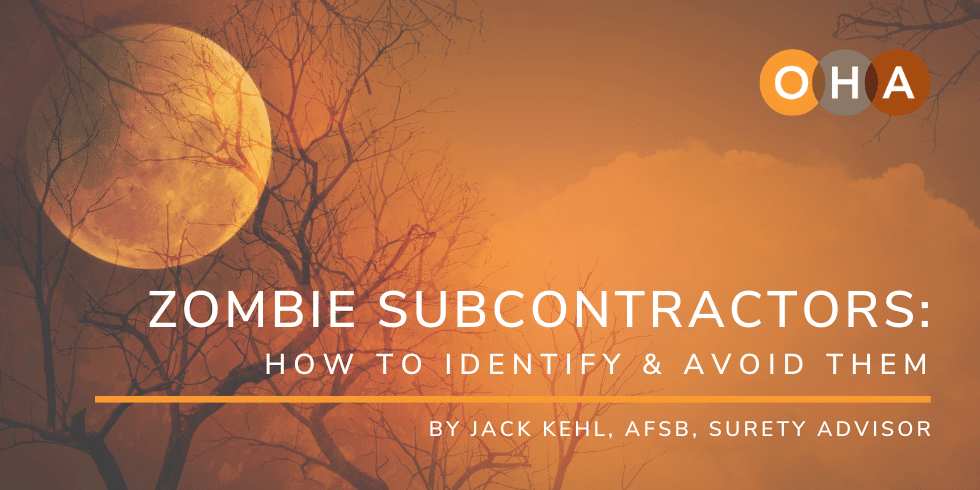 Recently, I spoke with one of my contractor clients who faced challenges on a project due to a failed subcontractor. After 25+ years in Surety, this story is all too familiar: bid day + low subcontractor turnout. Of the ones who do show up, you may not have heard of them before, you have only hired for a small ad-hoc job, or your trusted Project Manager has heard some good things. You only have minutes to evaluate the bid and decide whether or not to incorporate their number.

You do, and congratulations: you are the low bidder.

Moving from the theoretical side to the practical side of building a job, we invite our low-bid subcontractor to a Scope Review. During the review, you are leery of the sub’s number, so you probe the scope for completeness. You find the sub did miss a few items, but nothing significant the sub couldn’t adjust for a nominal increase in price.

Your team accepts the subcontractor bid –> unaware they just contracted with a Zombie Subcontractor.

My daughter tells me Zombies are people who, although dead, unexplainably continue to wreak havoc and destruction wherever they go. I also hear Zombie attacks have some common themes:

Let me explain how these Zombie attack themes happen on your job site.

Zombie Subcontractors Theme #1: The initial contact (or bid) we received on bid day was dangerous, traumatic, shocking, panic causing, and hampered your ability to deal with other bidders that day. The Zombie attacks are surprising and continue throughout the under-committed job. The project schedule begins to slip, quality issues arise, and paperwork is incomplete. Even when COs are merited, there are subs to the sub, and vendors are grumbling about payment: shock, disbelief, denial.

Zombie Subcontractors Theme #2: The response of the authorities, the General Contractor, is slower than the rate of growth, allowing the Zombie to expand beyond containment. Suppliers, vendors, and subs begin to file liens, bond claims, and make demands. Project owners hear of problems on the job, and the schedule continues to slip despite your best efforts. You confront the Zombie Subcontractor, but they are beyond help: they are already dead, disappear, or file bankruptcy. Now you must fight to survive!

All of this could be prevented by following these simple steps when subcontracting:

Know who is working.

Sounds simple – do not take bids from people you do not know, but we know that is impractical. So get to know the bidders and qualify subcontractors properly: before, during, and after bid day.

The keyword here is actively. Control the job site and know what takes place there from day one: Know who is on site, how many workers, what equipment is being utilized, and what the expectations are of each subcontractor’s schedule.

Some questions to ask yourself:

Answers to these questions will help you. For example, when an unpaid vendor bill comes in, you will have the documentation to know it was on the job site for three days and not two weeks.

All of this information becomes critical when under attack from the Zombie sub –> particularly true on bonded projects. Unions, Suppliers, and subs’ Subcontractors, all know a Payment Bond protects them from the Zombie Sub, but AT YOUR EXPENSE! Do not be surprised to see inflated billings, labor hours, and material billings show up at your door in an attempt to cover losses caused by the Zombie.

Have zero tolerance for non-performance.

The biggest regret my clients have is they did not follow their gut when trouble first appeared. Contracting is a challenging business, and surprises will occur. Getting used to surprises and problems means we ignore them because we deal with problems subjectively and not objectively. Excuses and blame-game tactics put you in the situation, which makes an easy victim for Zombies. In this case, hard & fast rules, processes, and procedures are your best defense.

Mitigate problems and recover schedules by moving quickly and decisively. Time and money are two valuable things you have, and you cannot afford to lose either for the project to be successful. Do not let the Zombie problem grow faster than your response rate.

You are moving quickly to address the issues unfolding, but unless you have a defense ready, you are a sitting duck for the Zombie. Have your paperwork in place: a solid, but fair, subcontract is my recommended starting place. Include Insurance Certificates and Lien Waivers for downstream waivers from suppliers, subs, and others. A surety bond or SubGuard policy is another tool to prevent Zombies Subcontractors.

Contracts spell out the processes to follow, but you need to ensure your team is also prepared, knows the process, and how to engage. It is not helpful to threaten a sub – he has you upside down on a job if you have not followed the contract, documented the issues, or do not have a bond.

You may very well experience a Zombie attack in the future, but if you follow these recommendations and work with accounting, legal, and professional teams to safeguard your company from attack, you will stand a much better chance of surviving.

Jack Kehl, a 25+ year veteran of the surety industry, is Surety Bond Manager for Overmyer Hall Associates, an Ohio-based Insurance and Surety agency specializing in serving the construction industry. Reach him at jkehl@oh-ins.com.